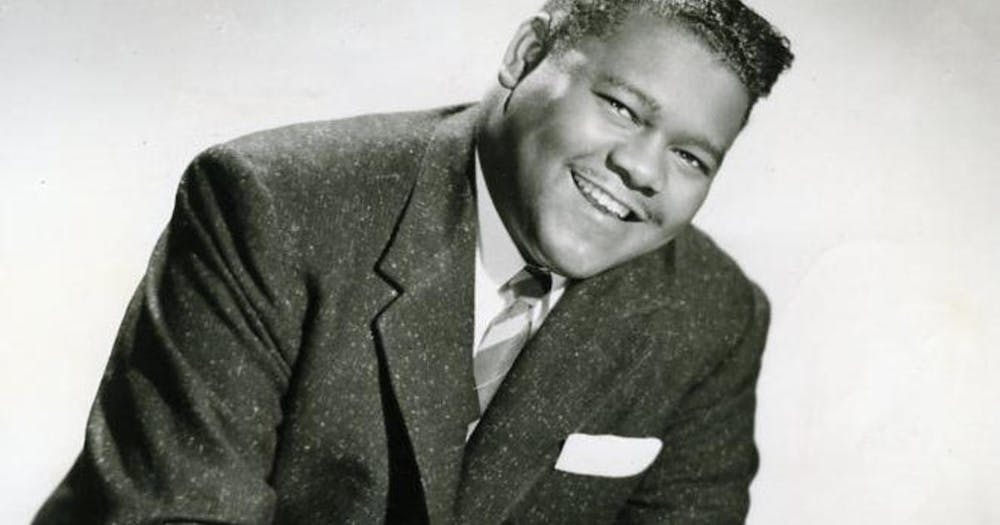 Follow Fats Domino to get alerts about upcoming events and special deals!

Fats Domino came out of New Orleans in the 50's with a rockin' piano to become one of Rock'n'Roll's earliest and best stars. He was born Antoine Domino in 1928 in New Orleans.

Without further ado, here are Fats Domino top 10 tracks of all time:

5. Jambalaya (On The Bayou)

to become one of Rock'n'Roll's earliest and best stars.

He was born Antoine Domino in 1928 in New Orleans. As a child he played piano and sang,

and the first language he learned to speak was French. He first performed in public at age 10.

He continued with music into the 40's and was heard by Dave Bartholomew, who would become

his writing partner on many of Fats' hit songs.

Fats joined the Dave Bartholomew Band in the mid-40's. He was influenced by Albert Ammons

and Fats Waller, among others.

he recorded the traditional Hey La Bas. "La Bas" was originally a voodoo god of luck,

was identified with St. Peter in French-Catholic Louisiana and finally became La Bas.

The record indicated a coming together of many years of New Orleans history and musical influence.

It was not, however, his first record to be released. A song about drugs called

The Fat Man was cleaned up a bit for his first commercial release, and it reached the R&B chart in 1950.

Acccording to some reports, the song was a million seller. The Fat Man also became a nickname for Fats Domino.

Another song that made the R&B chart for him, Every Night About This Time, used a piano triplet for which Fats was

to become famous. It showed how his music had been influenced by that of Little Willie Littlefield.

Fats Domino exploded onto the rock-and-roll scene in 1955 when his song, Ain't That A Shame,

and Domino's version on Imperial went to number ten. The song established both artists as stars.

Fats could be heard in the background on the records of other artists, such as Joe Turner and Lloyd Price.

He continued to write songs with Dave Bartholomew, many of which became hits.

In 1956 he put five songs in the top forty, including I'm In Love Again and Fats' rendition of a song that

had reached number one for Glenn Miller in 1940, Blueberry Hill. The latter went to number two and

was Domino's highest charting record ever.

Fats Domino was very popular. In 1957 he appeared in a movie that many consider

to be the best Rock'n'Roll film ever made, The Girl Can't Help It, singing his hit Blue Monday.

Another Fats Domino hit, I'm Walkin', was covered by Ricky Nelson in 1957 and helped

Other top ten songs followed in the late 50's for Domino: Whole Lotta Loving, I Want To Walk You Home,

and Be My Guest. The last song had a curious origin -- a teenager had been told by his father

to get a job or get out of the house, so he wrote Be My Guest and waited in line for a chance

to pass it on to Fats Domino. He was able to do so,

and heard from Domino's agent some time later; thus was begun the songwriting career of Tommy Boyce.

Fats has a smoky voice with a bit of a New Orleans-style accent, and he is very likeable.

Fats made music that was fun to listen to, and in addition to his pounding piano you could hear a sax riff,

or maybe a great tenor solo from Herb Hardesty or Lee Allen.

Fats' piano style is described as rolling boogie-woogie, with lots of triplets.

This was party music. There was always a heavy backbeat and his band rocked hard,

Fats Domino had his final top ten song in 1960 with Walking To New Orleans.

he did old standards such as Red Sails In The Sunset, which was his final top forty song, in 1963.

He also made some more films along the way, including Shake, Rattle and Roll, The Big Beat, and Jamboree.

Fats played Las Vegas frequently, and at the Royal Festival Hall in London in the 80's.

He had to leave a tour of Great Britain in the 90's due to health problems.

Fats Domino still lives in New Orleans with his wife Rosemary, with whom he has had eight children.

His awards have been many, including Grammy's Lifetime Achievement and Hall Of Fame Awards.

In 1986, Fats Domino took his place in the Rock and Roll Hall of Fame. by Tom Simon

No upcoming events with Fats Domino