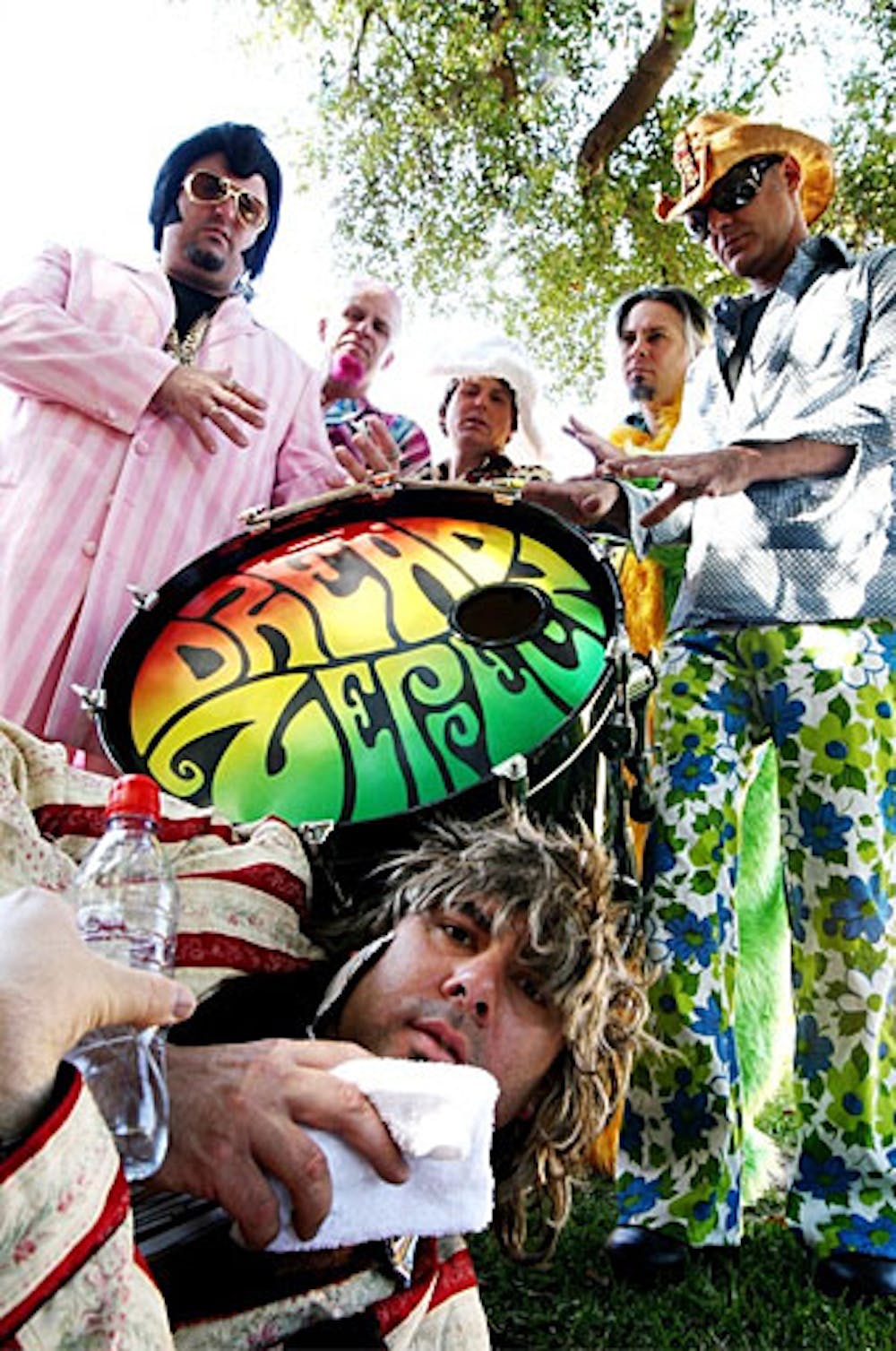 Follow Dread Zeppelin to get alerts about upcoming events and special deals!

It is a well known fact that Elvis Presley's birthday falls on January 8th.

Without further ado, here are Dread Zeppelin top 10 tracks of all time:

3. Heartbreaker (At The End Of The Lonely Street)/Heartbreak Hotel

6. Your Time Is Gonna Come

9. When The Levee Breaks

It is a well known fact that Elvis Presley's birthday falls on January 8th. Well, eighteen years to the day after their first gig on January 8th 1989, (or 1956 if you believe lead vocalist Tortelvis), a replica Ford Pinto, containing 5 reggae musicians, smokes its way onto another stage. This time it's the The Coach House in San Juan Capistrano, California, two thousand and twenty one performances later. "It's a hot time in Orange County" Tort exclaims just before Charlie Haj, the man who hands him his water and towels on stage, gives him his final stage instructions. "Tortelvis, dispite your age of 35, your obviously in poor health and way over weight. I know you've come to accept your appearance and so have your fans. So please, watch your step on the way to the stage". And with that, the group that plays "Led Zeppelin music inna reggae style with an Elvis impersonator, is at it again!

Since that day in 1989, Dread Zeppelin have released 12 cds, produced several videos (one in which Butt-head still says "whoa, that's cool" and Beavis just agrees ), starred in a motion picture, and have toured in over thirty countries including Japan, Brazil, Australia and all of Europe. Their tight and sometimes shredfestual brand of reggae music combined with a stage show that re-defines the word, have prompted even Robert Plant himself to speak out in support of Dread Zeppelin's version of "Your Time Is Gonna Come" over his own Led Zeppelin version! As you know, Dread Zeppelin is fronted by lead singer TORTELVIS, described as a cross between Vegas era Elvis, Dracula, and Liberace! Tortelvis is always accompanied by his faithful manservant, CHARLIE HAJ. Charlie quietly wipes the brow of the "Pompadoured Butterball" and keeps him in fresh towels. Lead guitarist BUTT-BOY is a tall scary man with an obvious secret agenda. Bassist BOB KNARLEY, a geeky reggaemon and a darn good player, along with drummer ZIGGY KNARLEY, are often mistaken for killer reggae rhythm section, Sly and Robbie. Anchoring the whole thing together is keyboard player and now producer, Spice.

Since the release in 1990 of their debut cd “Un-Led-Ed” for IRS Records, Dread Zeppelin have continued to play to diehard fans and confused faces in crowds around the world for almost 20 years. While the make-up of the band has gone through a few member changes, the main forces of the band have remained to reveal new and old sounds, and look for a new generation of Led Zeppelin fans and anti-Led Zeppelin fans. Dread may always be considered to most, purely a novelty act. However, some may argue that unlike a number of those acts, the bands longevity is due to their ability to actually play. On their latest release, Bar Coda “, they managed to step back in time with their camp approach they are known for. Tortelvis, has made a career of imitating the vocal style and mannerisms of the late Elvis Presley. However, “the times they are a changin.” Kinda! While Tortelvis still carries some of the Elvis inflections into his own style, the music seems to be more timeless when not reverting to the use of fat, food or drug references, although their use of weaving many songs and riffs together make for laughs of their own.

Produced and recorded by Spice (Dread Zeppelin's longtime drummer), Bar Coda reveals possibly a more mature sound, laced with rhythmic oriented beats but still somehow sticking with the classic DZ formula. Butt-boy's guitar adventurism is also evident when challenged to create more unique versions of familiar songs like That's Alright Mama and The Lemon Song. At times the guitar echoes a sonic tone not unlike that of 'Korn' and 'Mashuga'. Drummer Ziggy Knarley's beats reflect an almost jazz / rock hybrid, mostly evident in tracks like No Woman No Cry and Out On The Tiles. Spice has taken over the reigns as Bob Knarley relinquishes his producer to role and as brings it on home with Bar Coda. A recording that takes it's roots from "the old" Dread Zeppelin, (Led Zeppelin, Elvis and reggae). Who knew!
Celebration Day, The Lemon Song, No Woman No Cry, The Ocean, The Rover, Suspicious Minds, Out On The Tiles, That's Alright Mama, Thank You and title track Bar Coda. I have a feeling that Mr. Plant will be "thanking" Dread Zeppelin for their version of Thank You and even preferring it over his own just like in the old days.

No upcoming events with Dread Zeppelin