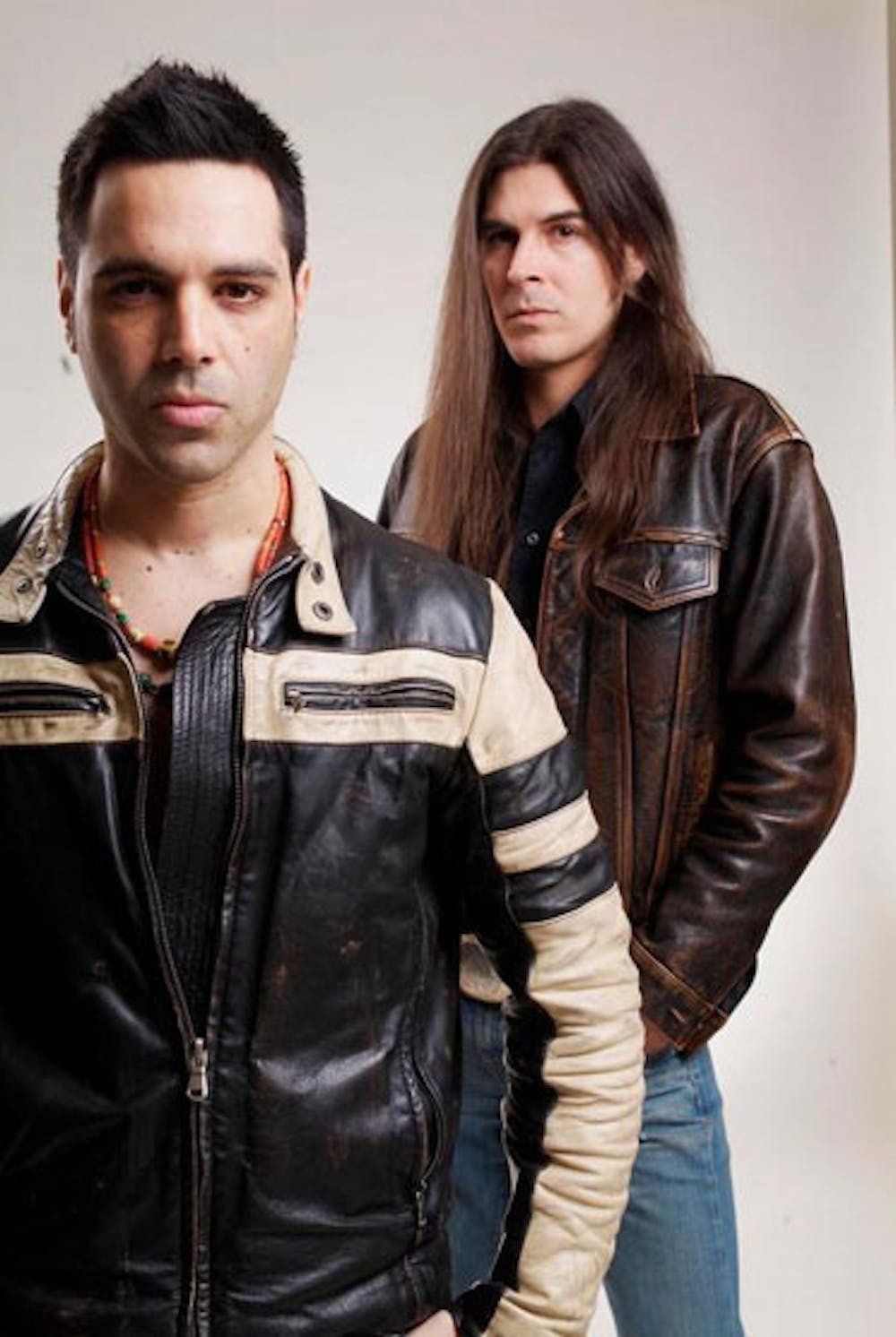 Follow Astral Projection to get alerts about upcoming events and special deals!

Lior Perlmuter and Avi Nissim first met at elementary school at the age of nine.

Astral Projection has performed in venues such as: Analog BKNY

Without further ado, here are Astral Projection top 10 tracks of all time:

1. Let There Be Light - Outsiders Remix

4. Dance Is The Answer

7. Searching for Ufos - Out of Orbit Remix

Astral Projection, Out of Orbit

Lior Perlmuter and Avi Nissim first met at elementary school at the age of nine. Lior started working with synthesizers at the age of eleven and two years later teamed up with Yaniv Haviv under the name Paradox. Even earlier Avi had already started DJing and performing in heavy industrial bands around Israel. In 1989 Lior and Avi first teamed up. Avi was already a well-known DJ (playing Acid, Techno, New Bit etc.). They created their first group and named it SFX (short for sound effects). They started doing gigs in all underground clubs around Israel and made their first breakthrough in 1991 with their single Monster Mania that came out on the Belgian Company Music Man. They started working on an album and later that year while Yaniv was still serving at the Israeli army, they decided to try their luck at the big apple.

After a short time Avi went back home to carry on developing his own music, while Lior stayed and worked in a sound studio, remixing, producing and working as a sound technician. In 1992 through Lior's work, they released a single called JBIE under their own label X-Rave Records in the US. In 1993, while Lior was still in the USA, Avi teamed up with Yaniv and Guy Sebbag under the name SFX and they released a single called Another World under Trigger in Germany.

At the beginning of 1994 Lior decided to come back home and work on his own material with the rest of SFX under their newly formed label Trust in Trance and they started working on their first CD- Trust in Trance Vol. 1. At the same time they signed up with Phonokol and released the CD with great success. After that, Guy decided to leave the group and work on his own.

In 1995 the guys finally opened their own professional sound studio on a more commercial level. They became more exposed to the world market and started playing live shows in events around Europe, while working on their second album Trust in Trance vol. 2. But this time Yaniv, Avi & Lior made the tracks under the name Astral Projection. Trust in Trance vol. 2 entered the Israeli best selling album chart and reached the number 2 position. Both albums became very popular over Europe and in Goa and were played by all the leading DJs. Both CDs were released as a double album by Smart Records in Scandinavia and many of the tracks were released on different singles and compilations world wide by different record companies/labels (among them: Fairway, BMG, Distance, TIP, Blue Room Released, Transient, Rumour, Perfecto Fluoro, Symbiosis, MCA, Euro Media, Vision Sound Carriers).

The third Trust in Trance album contained already five tracks under the name Astral Projection (one featuring MFG). Trust in Trance vol. 3 was their major breakthrough into the European market, the album was reviewed by the leading UK music magazines as a masterpiece, and Astral Projection were crowned as the masters of psychedelic trance from Israel. What followed was just a big success: Leading UK and world DJs kept Astral Projection constantly on their play list; A full computerized animation video was made for People Can Fly and was played on MTV Europe, Viva, MLM, Channel+, M6 and other TV stations over Europe; The guys played in over 30 live shows around the world in one year; The CD was released through TIP (as Astral Projection- Trust in Trance), one of the major trance labels.

Then followed Astral Files, the first CD to be only under Astral Projection name. The CD contained new Astral Projection tracks (one, a collaboration with Dado (Transwave, Deedrah)) and remixes of 4 big hits. Astral Files was released also by the well-appreciated British label- Transient Records (which since then has been releasing all their albums). Again the album received great reviews and most tracks became huge party hits.

Following that, Avex Records (Japan) released a CD called "The Mix", containing a mix by Avi to their best tracks. A lot of singles were included on countless compilations and under many labels in Europe, The US, Japan, Taiwan and others around the world. Astral Projection appeared on countless live shows in a lot of events and festivals all over the globe. In the end 1997 Astral Projection released Dancing Galaxy. As Yaniv changed his direction in music and life he left the band and it was Avi and Lior by themselves again. The album took nine months of work in the studio (Just like a new child, as Avi says). Along with the CD an animated video clip was released for the first track Dancing Galaxy. The album was also released on different labels around the world: Transient, Avex (in Japan- where it was sold with a bonus CD), Blue Moon Production (Taiwan) and others. With the great success of Dancing Galaxy which is probably the most selling artist's trance CD ever, came a lot of shows around the world. Among the special ones were: A performance at the opening night of "The Israeli Season in France", with the participation of the French Culture Minister and VIP's from France and Israel; Performance as guests of the Israeli ambassador to Yugoslavia; Ibiza; Russia; Croatia; USA; and all over Europe.

During 1998 they also released SFX- The Unreleased Tracks 89-94 that contains all their early hits from those good old times. In the beginning of 1999 they released few tracks on A new Trust in Trance compilation- The Next Millenium, among them some new tracks and some remixes to old ones.

In February 1999 Another World was released. It took more then ten months in the studio and contains a new remix to one of their first singles- Another World, after which it is called. It also contains a mix to the classic Trilithon's Trance Dance. They remixed Faithless's God is a DJ and the 2 mixes were released on Psychedelic Vibes 6 and on Israeli Psychedelic Trance vol. 4, and also on a remixes single to Faithless.

In May 2000 they released a double mixed CD- In the Mix- with seven remixes to old tracks, by themselves and others, four new tracks, and the rest is all classics, basically "the best of"- almost 160 minutes of a mixed musical journey with the guys. Transient also released the unreleased tracks unmixed on vinyl. To their new live act they were joined by one of the best Israeli drummers- Dani Makov (Siam, Nikmat Hatractor & more).

They are currently working on their next album.

No upcoming events with Astral Projection